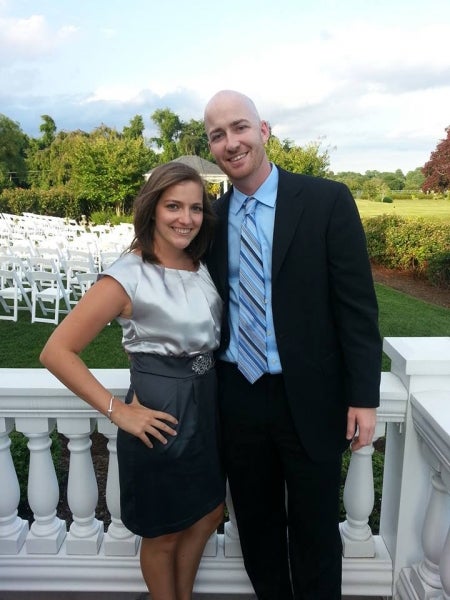 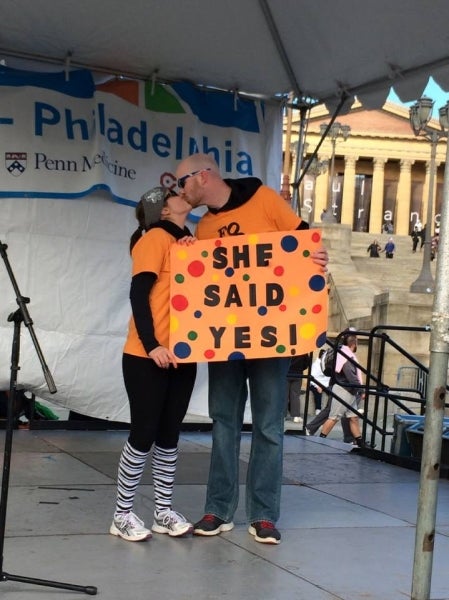 The goal of this ongoing series is for the Alumni Association to tell the story of a student or graduate that relates to the theme of the month. As Valentine’s Day approaches, we wanted to share the story of two students who met under some of the worst possible circumstances. Their story of meeting, reconnecting and their eventual relationship is a testament to how the power of love can help one overcome life’s roughest obstacles.

Maureen Tait was a student at the College when she was began to experience severe migraines.  After seeing her doctor and undergoing extensive testing, it was determined she had a “tangerine” sized tumor in her brain, which her doctors suspected could have been growing for as long as tenyears. She was immediately rushed into surgery four days later and the tumor was mostly removed.  The following months brought an extensive campaign of chemotherapy and radiation treatments which weakened her so much she needed to be admitted to Riddle Hospital for round-the-clock care.While in the hospital, she met fellow student Jim McDougall.

Jim McDougall was employed as a Nurse Technician at Riddle Hospital while also taking classes to become an Emergency Medical Technician. During his shifts at the hospital, he met Maureen and helped with her day to day needs “in a purely professional manner,” as he puts it. They would make small talk while he was helping with her various needs and eventually hit it off. After she was discharged, Maureen found Jim on Facebook to thank him for all he did for her while she was in the hospital.  She still had to come back to the hospital for follow-up tests and stayed in contact with Jim, which led to their first official date in November 2012.

Over the next two years Maureen and Jim continued to date, while she kept up with her follow-up screenings and he was completing his EMT coursework. The two participated in the Brain Tumor Awareness Walk in Philadelphia in 2013 as part of “Team Tangerine” which drew its name from the size of Maureen’s initial tumor diagnosis. When it came time for the 2014 walk, Jim had something special planned to commemorate the event.

“I had been planning to ask her for about six months, but could not come up with the perfect idea, and then it just hit me. My favorite photo of us was at the finish line from last year near Boathouse Row. So I decided to propose on the same spot, which was close to our two year anniversary.”

Jim ran into a slight problem when it came time to ask the most important question of his life, he found a crowd ahead of him in the same location. "There were like 10 people waiting to take the same photo, and Maureen doesn’t like to be the center of attention, so I was really nervous she was going to catch on and not want to do it.  However, when the moment came, I dropped to one knee and asked her to marry me, and she was totally surprised, saying yes without hesitation. My planning had definitely paid off, and our family and friends were there to witness our special moment.” Jim’s fellow nurses at Riddle Hospital contacted Action News ahead of time so a camera crew was there to film the proposal and their story made the news.

Jim has since completed his EMT classes and will begin to study to become a paramedic later this year.  Maureen has returned to take classes and is studying to become a special education teacher. They have set a date for their wedding in June 2016 at the Concordville Inn.

You can see the story on the Action News via their website http://6abc.com/society/cancer-survivor-gets-engaged-to-nurse-who-helped-in-treatment/378131/.