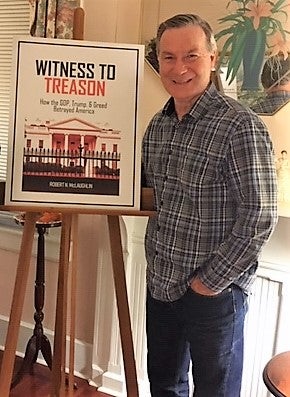 January’s alumni profile came by way of an advertisement in our local newspaper late last month. In keeping with current events, we’re sharing the story of Robert McLaughlin ’73, who has released his second book Witness to Treason: How the GOP, Trump and Greed Betrayed America. He’s come a long way since starting at the Dante campus in 1968, eventually graduating from Widener College in 1977, followed by a successful business career and current literary venture.

“I enrolled at the College in 1968. All of my classes through graduation were held in trailers placed on the grounds of the Dante School, a former orphanage in Concordville. The main building housed the administrative offices and I still remember the small bathroom where I changed each night into clean clothes after working on plumbing jobs in West Philadelphia. I completed my requirements for my Associates Degree in Business Management in 1973.”  Like many students, Robert continued his studies, choosing to transfer to Pennsylvania Military College, which was converting to become the current Widener University.  The switch from military academy to civilian college was a tumultuous time on the Chester campus but Robert completed his coursework and graduated with a degree in Business Administration in the spring of 1977.

After Widener, Robert applied his coursework working for companies like General Electric and the Bechtel Corporation, an international engineering and construction company. Toward the end of his career, he held the position of Senior Procurement Manager for Kvaerner in the former Philadelphia Shipyard. His duties included finishing the new shipyard project and building its first two container ships while managing millions of dollars in contacts and materials across the tristate area. Robert credits his elective courses at the College as having helped him both professionally and personally. “Interestingly, I consider my courses of Music and Art Appreciation, and Public Speaking to be courses that educated me outside my comfort zone, subjects and instruction that enhanced my life experiences after graduation.”

After retiring in 2012, Robert has been busy following his passion and putting pen to paper. He’s completed two books, both of which are now available for sale. His first book, Danny and Mickey, Ordinary Heroes, is “a 2016 biography of local baseball players, Danny Murtaugh and Mickey Vernon, and follows their lifetime friendship to winning the 1960 World Series.” Last fall, he released Witness to Treason. How the GOP, Trump, and Greed Betrayed America, described as “a 2018 fact-based detailed recounting of the events, forces, and institutions that contributed to the chaos that has dominated the American political discourse for nearly three years.”

To learn more about Robert, both books are available online at Amazon and Barnes and Noble websites. Additionally, both books have separate Facebook pages under Witness to Treason and Danny and Mickey, World Series.