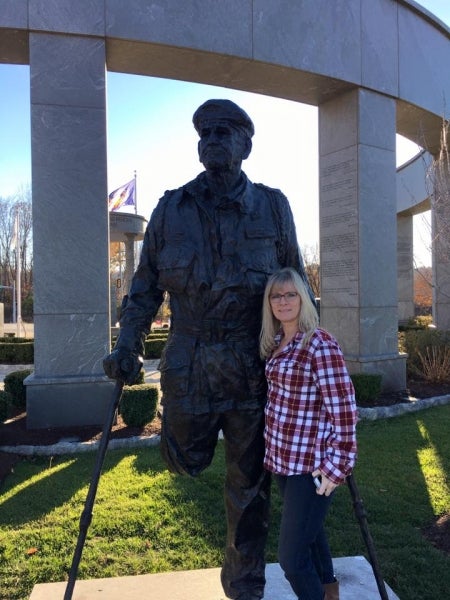 Debi Rafferty '87 has a unique connection to "The Greatest Generation" of veterans in addition to having studied at the College. Her grandfather, "Wild" Bill Guarnere was a highly decorated member of East Company, 2nd Battalion, 506th Parachute Infantry Regiment in the U.S. Army's 101st Airborne Division. This group of veterans would later be known as the Band of Brothers profiled in both a bestselling book and award winning HBO miniseries. We would like to share her story as well as thank all our graduates who have answered the call to serve in honor of Veteran's Day on November 11.

What year did you graduate from Delaware County Community College and with what degree?
"After attending Upper Darby High School, I graduated from the College in 1987 with an associate degree in General Education. This allowed me to take all of my prerequisites to study nursing. I wanted to enroll in the nursing program, but at the time, prospective students had to camp out overnight in advance, so unfortunately, I did not get in."

Where are you now?
"I am a Staff Nurse at Delaware County Memorial Hospital in their Labor and Delivery Unit. I am also the Office Manager at Cole Chiropractic Center in Drexel Hill. In my spare time, I am the President and co-founder of The Wild Bill Guarnere Memorial Fund which helped raise funds for the WWII Heroes statue at the Delaware County Veterans Memorial in Newtown Square. The fund is named after my grandfather, who was a WWII 101st Airborne Paratrooper whose story was told in the book Band of Brothers by Stephen Ambrose and followed by the acclaimed HBO miniseries produced by Steven Spielberg and Tom Hanks. Our goal is to continue to raise money and provide some services to help veterans in need.”

What is next for you professionally?
"I am deciding which direction I will go in before starting a master’s program. The work to get my grandfather honored at the Veterans Memorial took a lot of time and effort. I am glad that his statue will have a permanent home in the area where I can visit with him from time to time.  The dedication of the statue took place back in late September and I encourage everyone to stop by the Delaware County Veterans Memorial on Route 3 in Newtown Square and see the incredible work by the artist, Chad Fisher."

What is your favorite memory of your time on campus, outside of the classroom?
"My favorite memory would be the student lounge where my friends and I hung out talking and playing Ms. Pac-Man."

Did you have a favorite professor or class during your studies?
"Professor Tom Naples was my favorite during my time on campus. He taught my classes in Anatomy and Physiology and was one of the hardest instructors I ever had. He was also a great help to me as my student advisor."

What advice would you give to current students and alumni to capitalize on the education they received from the College?
"My advice would be to make sure your credits are transferrable to the schools and programs you want to pursue when you complete your time at the College. It’s never too early to monitor what you have and what you need as you begin to think about transferring."